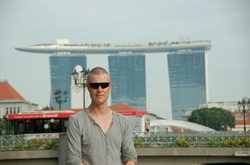 After graduating with a BA from the Royal Welsh Collage of Music and Drama in Cardiff, John started work in post production as a runner at the Moving Picture Company. Shortly after that he got his first job in production making music videos and commercials. Since then he has worked for a variety of companies such as Granada Television in Manchester and at UK Gold as Senior Producer, going on to run the creative department. Over a ten year period at the BBC John was lead Producer on BBC One making trailers for shows as diverse as Panorama to EastEnders, for which he won four Promax Gold awards for a single campaign. Shortly after this John moved areas within BBC Broadcast, to their ‘TV Department’ that made all the high-end commercial/trailers. He stayed in this area when his department was sold off and became Red Bee Media. During this time John produced some of the UK’s top commercial directors such as Michael Geoghegan, Ringan Ledwidge, Rocky Morton, Guy Manwaring, Jim Jenkins, Tim Pope, Graham Rose and Oscar winning  Kevin McDonald to name but a few. He has worked with talent such as Paul McCartney, Michael Stipe, Luciano Pavarotti, as well as some of the BBC’s biggest stars like Jonathan Ross and Michael Parkinson.

In 2007 John was approached to run Pink Films. In March 2008 he rebranded it to Spank and spent two and a half years running one of Soho’s top commercial production companies. During this time he produced a number high profile commercials, and in 2009 was part of the APA trade delegation to China.

But missing full time hands on producing, and in an ever changing media world wanting to broaden his production skills, in September 2010 John left Spank, and has been working solidly ever since, producing, writing and every now and again, even doing some directing.